Update 4 June 2018: I recently came across this article by John D. Cook, which may give some food for thought before jumping in trying to find distributions fitting your data.

As part of my capstone projects at uni (my iLab), I’m trying to work out the length of stay for hospital patients in Australia, based on historical data. I was looking at the data the other day, trying to work out the statistical distribution of the target variable. Certain models make assumptions about the data (for example, linear models assume the residuals are normally distributed), and I wanted to be confident I wasn’t violating any such assumptions.

I realised I didn’t know how to do that.

It’s probably worth noting at this stage that if you just want to know whether your data fits a normal distribution, you can use the Shapiro-Wilk test of normality.

I found this image at the end of this blog which gives a nice decision tree to point you in the right direction. But I wanted something a bit more rigorous.

I had a vague recollection one of my colleagues had done something similar last semester, so I reached out to her and she sent me her team’s code. Based on what they’d done, I took a look at the fitdistrplus package, which seems to do what I’m after. An article in the Journal of Statistical Software goes through the package in a bit more detail than the R documentation. I’d recommend it as a starting point.

If you want to follow along, my code is here.

I’ve signed a non-disclosure agreement with my client, so I can’t use their data here. Fortunately, I found a similar dataset online – the Centers for Disease Control and Prevention’s National Hospital Discharge Survey. I used the most recent (2010) data, which you can get here.

I’ll admit here that the data has some patients with very long hospital stays (of the order of months), which made many of the charts unreadable. So I trimmed them, using a somewhat arbitrary 95% of the data:

The first step is to narrow down the candidate distributions to consider. My data looks like this (created with the fitdistrplus::plotdist()  function): 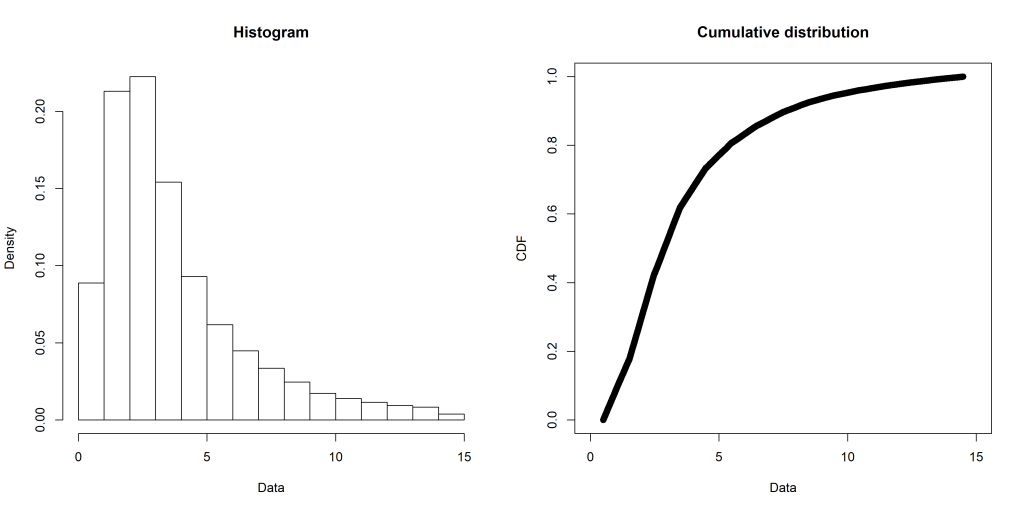 One way to work out possible distributions is to use the decision tree I mentioned above, but an easier way is with the fitdistrplus::descdist()  function. Running for my data gives this plot: 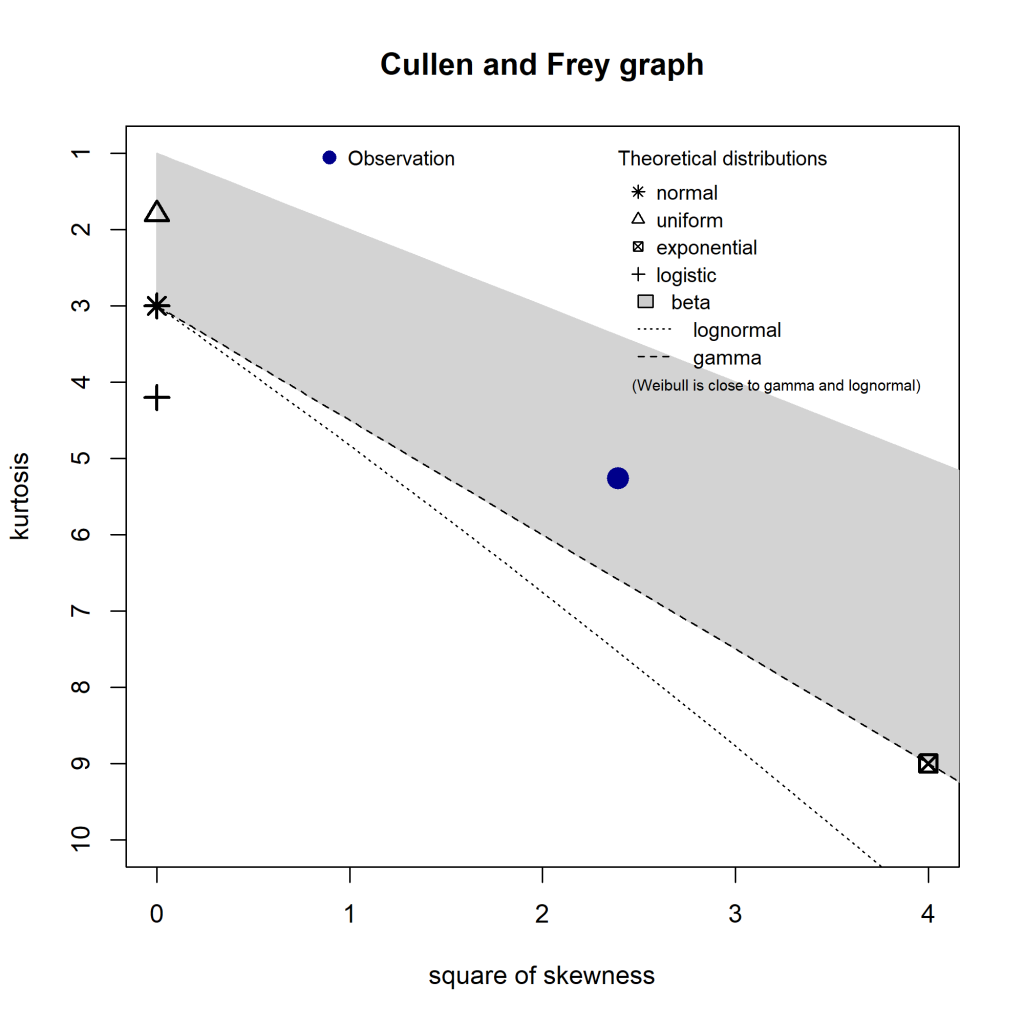 The distributions to consider are those closest to the blue Observation. So my data’s unlikely to be uniform, normal, or exponential. It lies in the beta range (but as my data isn’t all in the 0-1 range, I disregarded that). But it’s also fairly close to the gamma and lognormal lines, so I’ll check those out. I’ll also check out the Weibull distribution (as the note says, it’s close to gamma and lognormal), and just for contrast, I’ll leave the normal distribution in there too.

The fitting itself is done with the fitdistrplus::fitdist() function. Running for the Weibull distribution gives something like this: 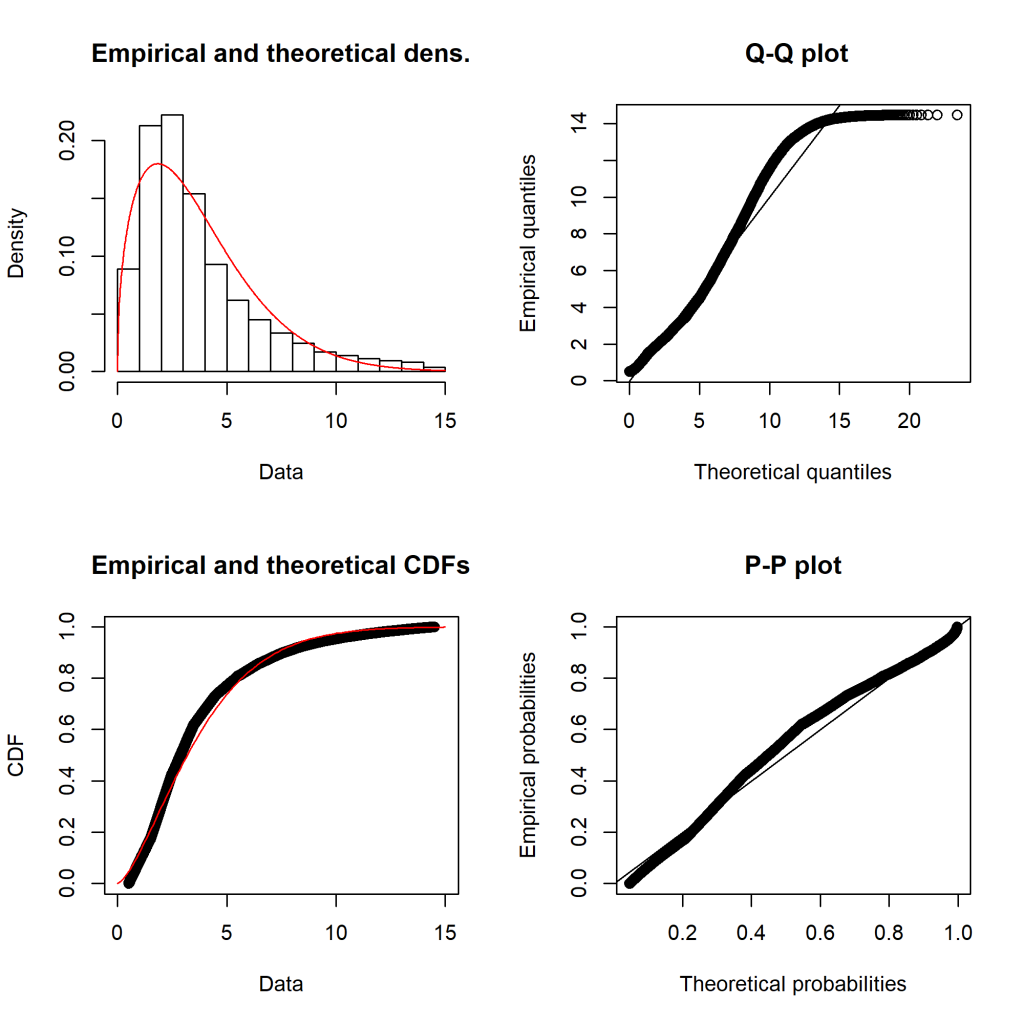 The equivalent charts with all four distributions for comparison: 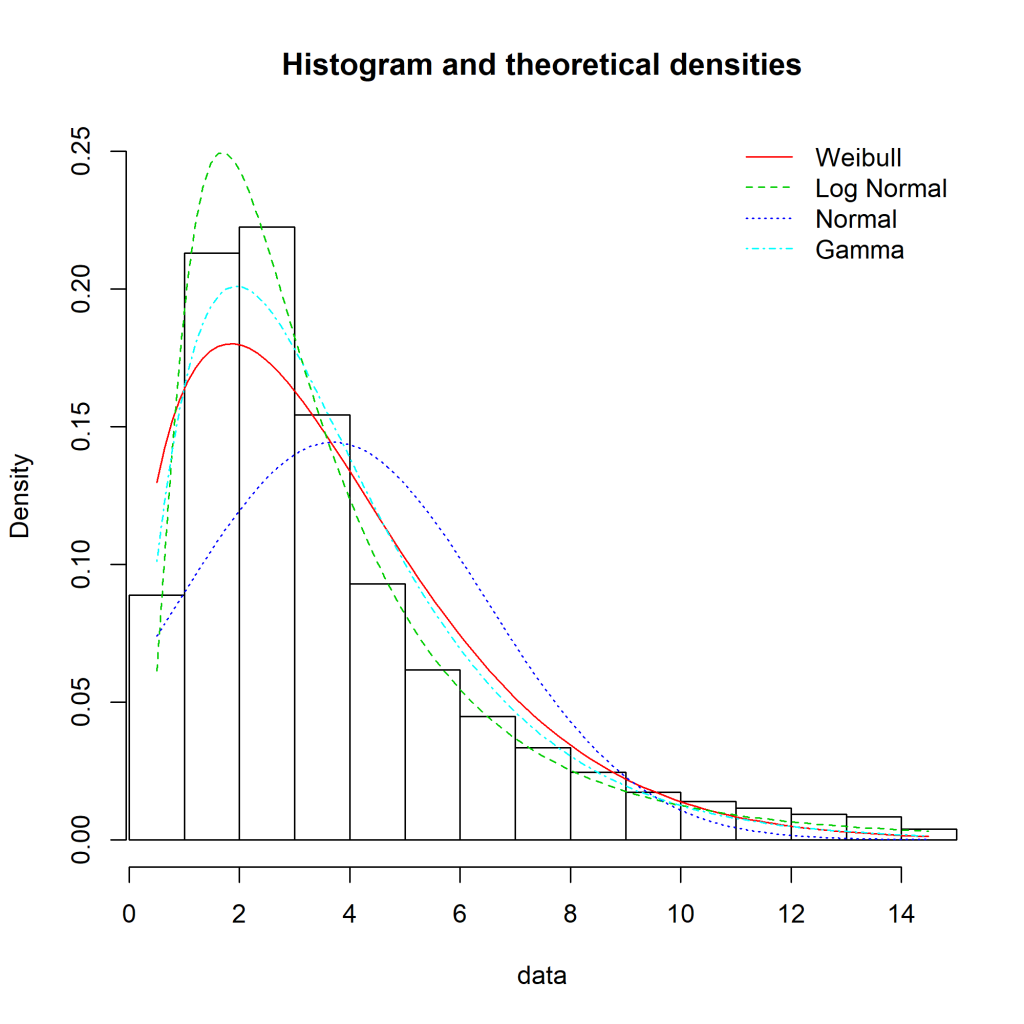 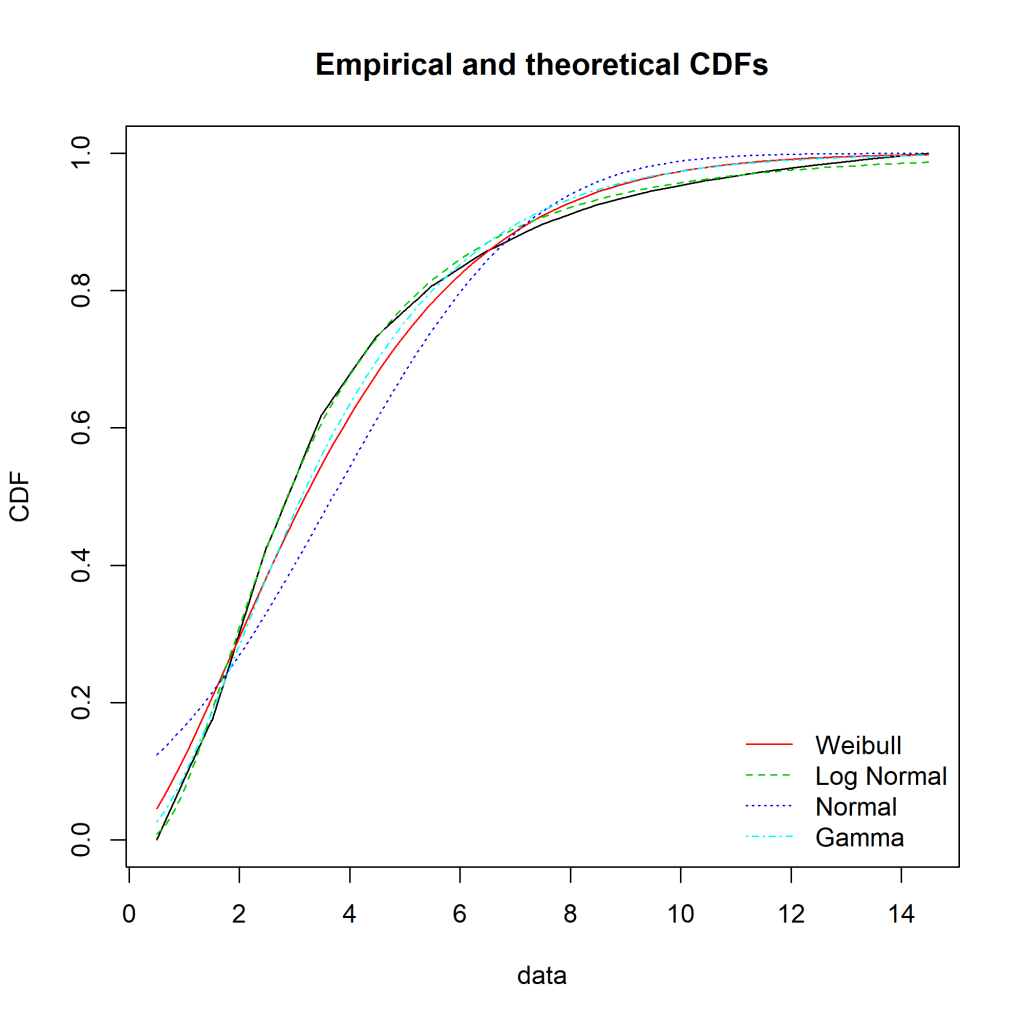 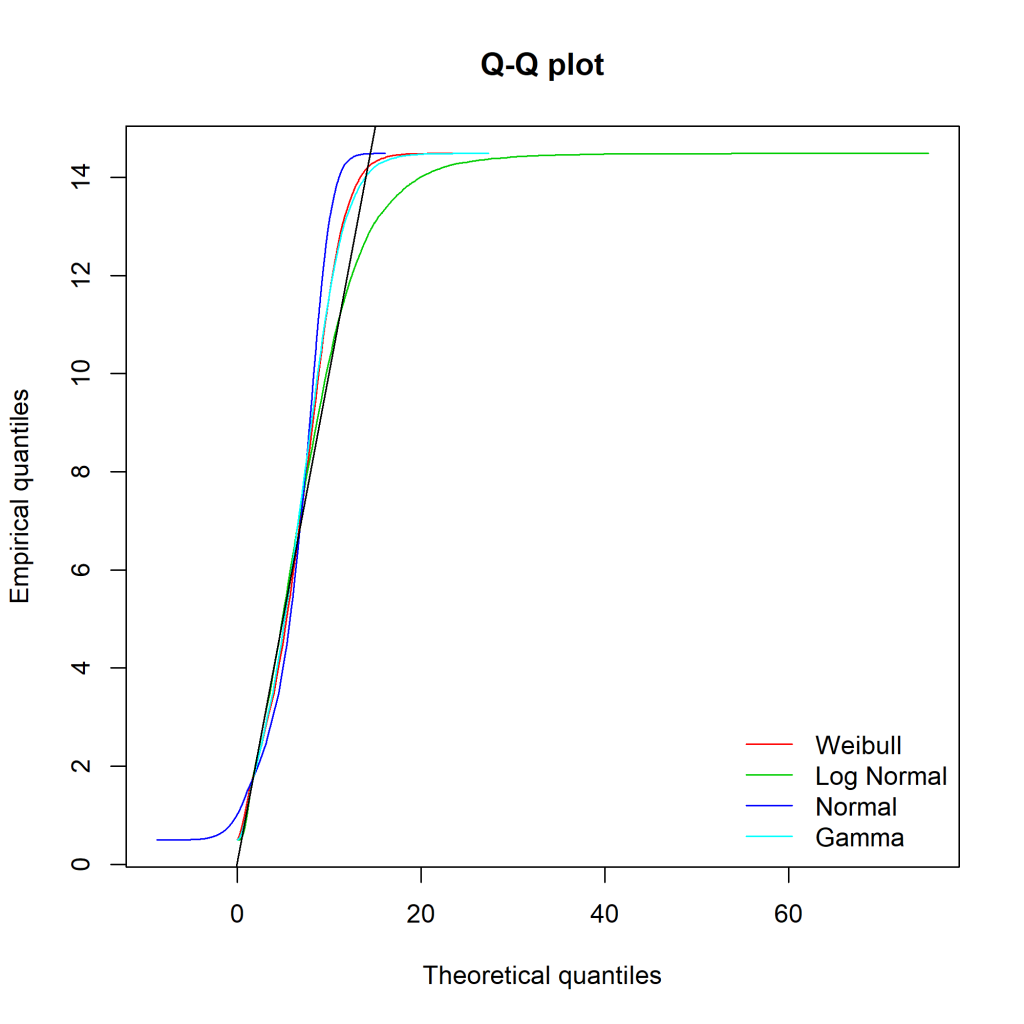 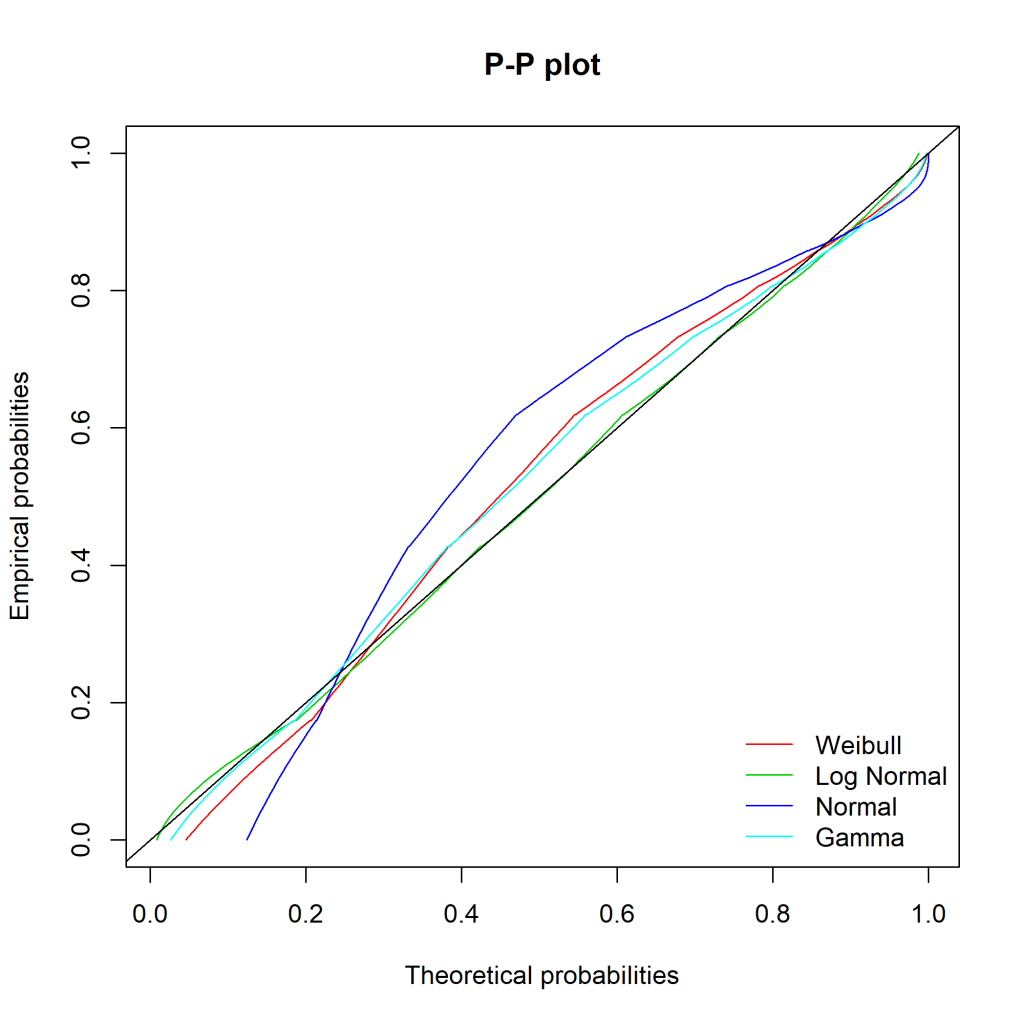 We can see that while the lognormal distribution seems to fit the data well in the centre of the distribution (as evidenced by the P-P plot), it fits badly at the extremes (see the Q-Q plot).

It’s not obvious from the plots which, if any, of the distributions fits the data. Time to look at the figures.

The fitdistrplus::gofstat()  function gives us numerical goodness of fit statistics, with the best-fitting distribution listed first.

Note that for discrete, rather than continuous, distributions, a Chi-squared test should be used instead.

So sadly, even Weibull distribution fails to describe our data. Happily, I had more success with my client’s data.

This website uses cookies to improve your experience while you navigate through the website. Out of these, the cookies that are categorized as necessary are stored on your browser as they are essential for the working of basic functionalities of the website. We also use third-party cookies that help us analyze and understand how you use this website. These cookies will be stored in your browser only with your consent. You also have the option to opt-out of these cookies. But opting out of some of these cookies may affect your browsing experience.
Necessary Always Enabled
Necessary cookies are absolutely essential for the website to function properly. This category only includes cookies that ensures basic functionalities and security features of the website. These cookies do not store any personal information.
Non-necessary
Any cookies that may not be particularly necessary for the website to function and is used specifically to collect user personal data via analytics, ads, other embedded contents are termed as non-necessary cookies. It is mandatory to procure user consent prior to running these cookies on your website.
SAVE & ACCEPT